It must be the time of year, but January often brings up a need to update this blog! The boat has been finished for a while now, and rigged and sailed and rowed, though not exhaustively. I'm looking forward to the coming season, and to spending a lot more time sailing the boat. On New Years Day, I got out for a row. A shortish one in the 20 degree weather, but I made it out to the daymarker and back, about 3 miles. Enough for a cold day.

I'd like to bring this project to a close, and move on to other things. But to pick up first where I left off…

The foils were cut out, shaped, and sanded. I next cut strips of glass on the bias to wrap the leading edges (easier around the curves than 90 deg. tape), putting on a couple of layers for protection on grounding. The daggerboard in particular needs to be rugged, and the wood (spanish cedar) is soft. The rough glass edges were smoothed, and then a whole piece of cloth was cut to shape and applied to each face of both foils. I've been graphite coating foils for years, to good effect, so I did this daggerboard as well. I painted the rudder blade though, because I didn't want a black blade spoiling the paint scheme. The trick to graphite coating is to mix plenty of powder into the epoxy so that it's consistently dark enough, and I usually apply two coats as well, sanding in between. It's a little messy to sand initially, at least dry. I use a random orbit with 100 grit dry at first to smooth things out, re-coat, then switch to wet abralon pads, 220 through 1500. There's often a little sand through in places, but I leave those alone. The graphite/epoxy produces a very tough, durable surface that holds up for years, and is easy to touch up if necessary.

All that remained now were the sails and spars! I decided to go ahead and get the boat out of the shop. It was rowable at this point after all, and I needed the shop space to glue up the spars, so I called Marco, my mover, plus Matt and Chris to help with the big move. It's pretty exciting stuff, moving a boat out of the shop for the first time. My situation is a little different than most builders, in that I have a long hallway and an elevator to negotiate! But the elevator is huge- it's an industrial building with a real loading dock. We were actually able to roll the boat out of the door, by setting her on her bilge on top of two carpet dollies. Then we rolled her on down the hall and into the elevator.

Mouse is light enough to be handled easily by two or three people. Two can pick her up for a short time, but four is better for carrying without wheels. At any rate, she went right in the box truck, with her nose poking through the gate up in the cab. We were even able to close the roll down door! Mouse and crew made quite an appearance at the club that day, with plenty of hands eager to help put her on her dolly.

Launch day was an event too. It actually took another week to get the dolly finished up with rollers and winch, ready to launch. We had a good spring day for it- warm with a pretty light southwest breeze. Mouse looked right pretty tied to the dock, sitting on her lines perfectly. 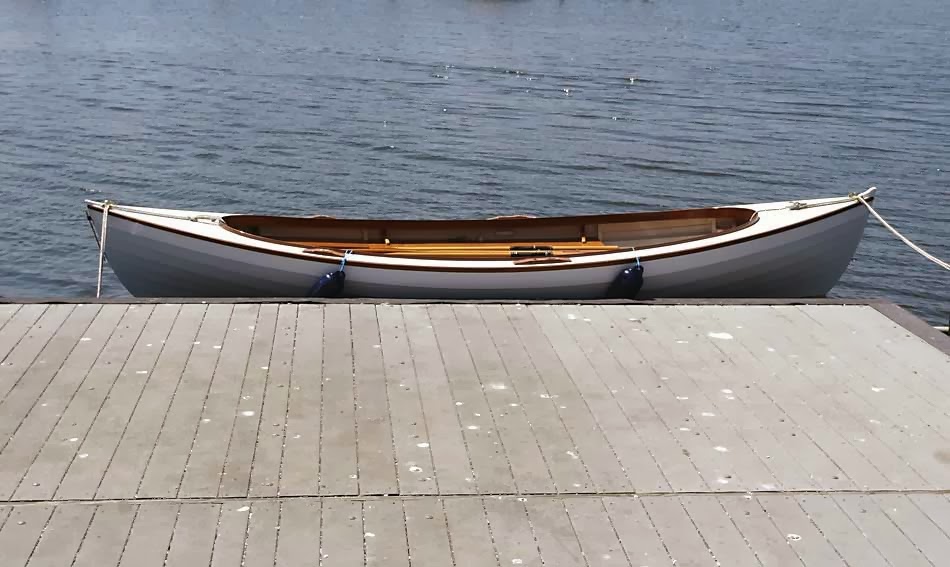 I expected her to have quick motion, with that deadrise and high bilge. I wasn't foolish enough to try stepping onto her side bench, but like a canoe, stepping into the middle with a hand on the gunwale does the trick. Once settled down, her motion is fine, and man she's light as a feather with one aboard. Rowing from the aft thwart feels effortless! I rowed around a bit, then Holly and I took off together, with me rowing from the forward thwart at first, then both of us rowing together. 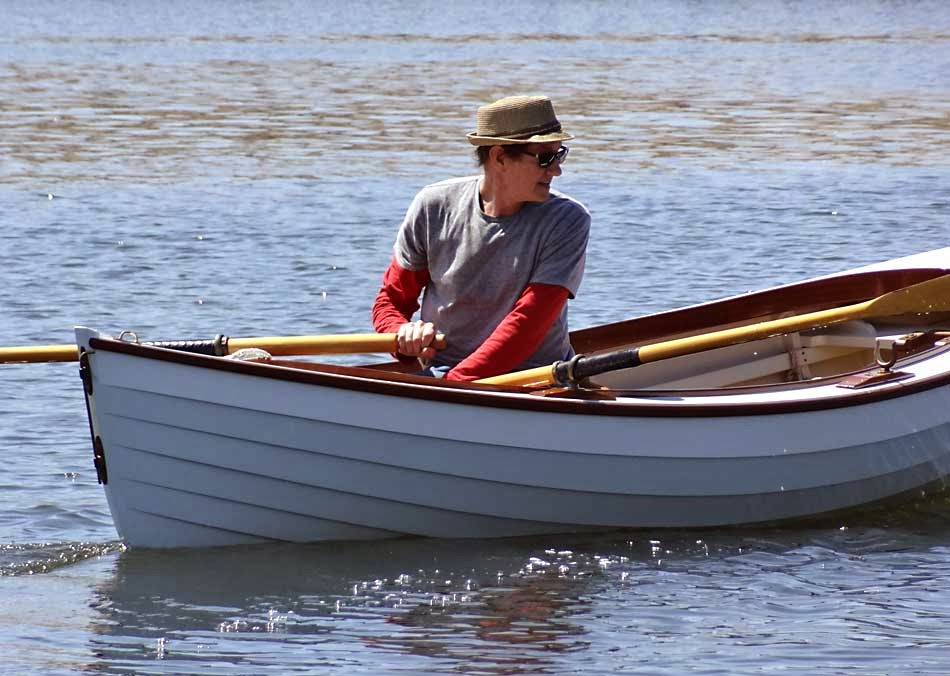 Over the next few weeks, I rowed out to the islands a few times, getting a feel for the boat in wind. She seems to like me in the aft position most of the time. In a quartering breeze, she wants to round up-that seems to be her toughest course. Beam to is fine, tracking well even if making some leeway. She is light after all. But I was very anxious to get the sails up, and tried to stay in the shop to get those spars done. I'll cover that next time. 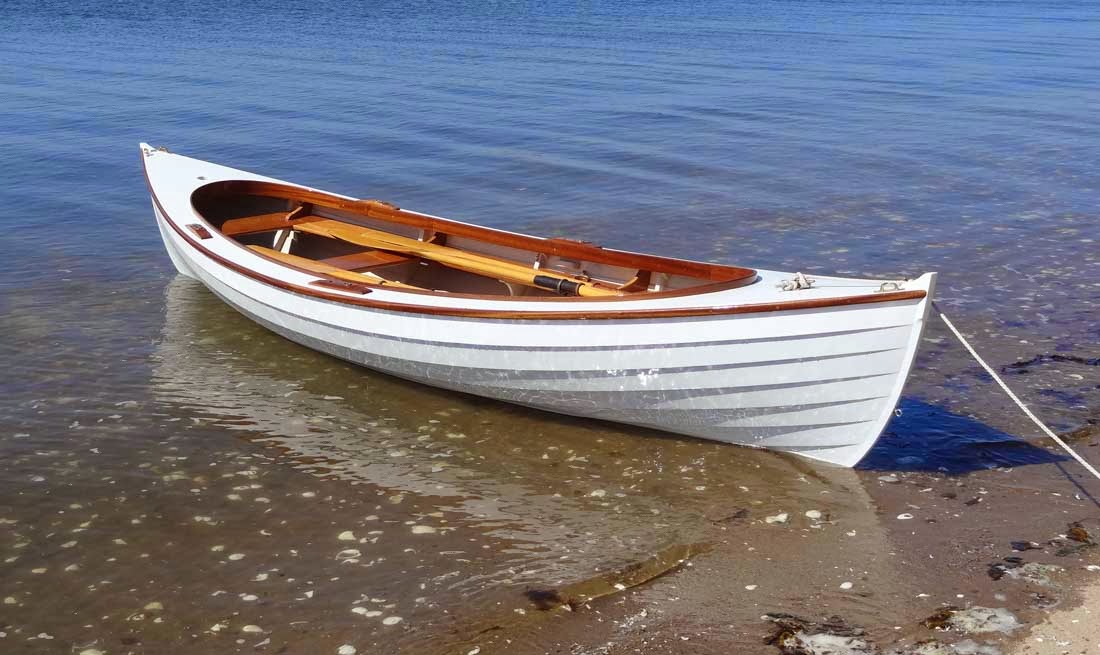 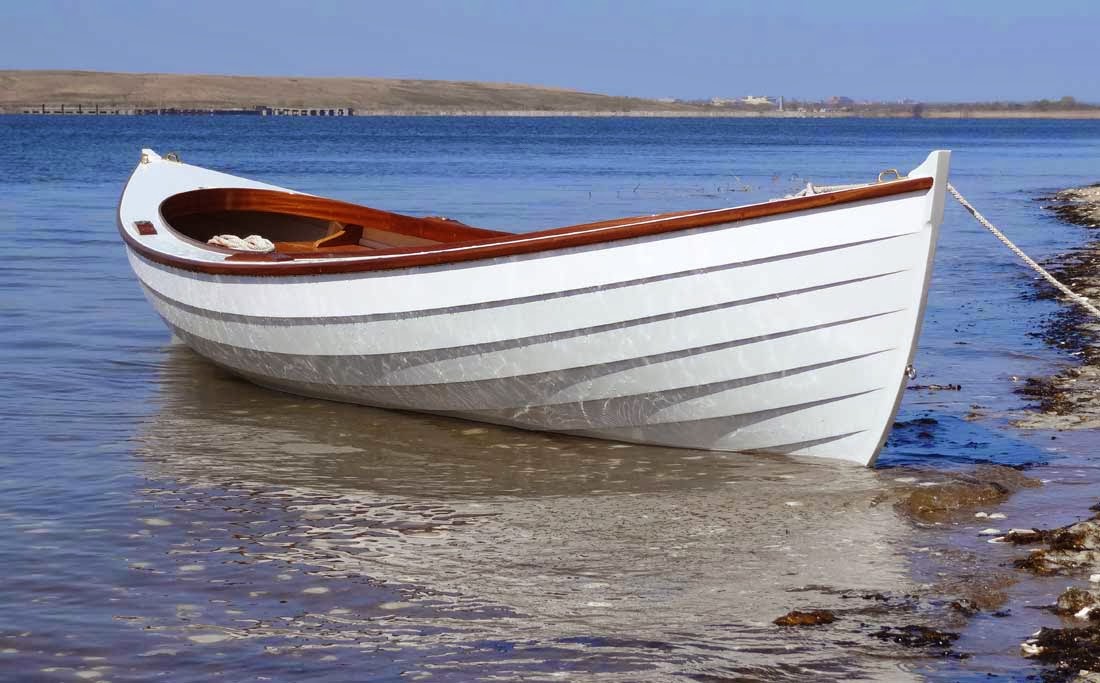 Thanks to everyone for looking at this blog!
Posted by Jimbo at Saturday, January 11, 2014