The decks are now finish painted, and all that remains deck-wise, are the mooring cleats and skene chocks. We'll look at those in a later post.

The shop has had, unusually, a little down time recently so I decided we might jump on the launching dolly project. I don't usually include the boats in our "make work" for the shop, but I didn't really have a shop specific project I wanted to do. Ashok lost a few days work due to the hurricane, and I didn't want him to lose more, so with both motive and opportunity, we tackled the dolly.

Launching heavier boats at the club presents some problems. We don't have (and don't want) a ramp for trailers because that would drastically alter the purpose and function of our boating program. For the Boston Whaler (our regatta and Safety Boat), we use the neighboring Yacht Club's ramp, but that only happens twice a year, as the whaler lives at the dock from April to November. The Lasers, Sunfish, and 420 use Seitech dollies. These boats are light enough to slide in and out by hand. My crab skiff Cricket, and others like Chris B's melonseed, and Matthew's flat iron skiff, are too heavy to pick up and put on a dolly. So we use modified dollies, custom built to accommodate our boats. These are like a cross between the Seitech models and true road trailers, and use winches or block and tackle to haul the boats from the water. Cricket's dolly uses Seitech wheels and a carpeted bunk cut to shape. It works okay, but the bunks create a lot of friction, and I still have to lift the bow out of the water and onto the bunk, then crank it up. For Mouse, I needed a better solution, so I designed a dolly with keel rollers and a tongue that extends aft past the axle and bunk.

The dolly has to be as light as possible, but strong and very stiff. If I had the equipment, it would be quick work to weld the thing up in steel or aluminum, but I am a woodworker, and wood we got, so that's what it will be. I designed the main beam (tongue) as a hollow box beam, using 3/8" multi-ply skins, with either ply or solid wood blocking inside where needed for bolts or structure. The axle/bunk is made in halves, with the aluminum axle rod sandwiched and glued in between. The boat-shaped bunk will be built into the axle structure. 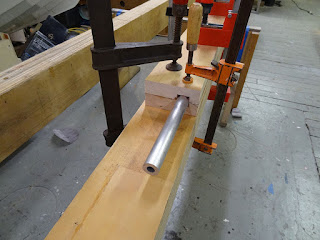 I bought the keel rollers and winch from an online trailer parts store (of which there are many), and had the parts in hand before building the dolly. One important note: the winch ratchets in both directions, a necessity with rollers, as the boat can easily get away from you when launching! I made a pattern of the underside of the boat the last time it was upside down, to use when laying out the dolly. Mouse, if you remember, has a flat plank keel, like a wherry. It measures a little more than 4" wide on the outside, enough to sit flat without falling over (I hope) as I winch it up the dolly. The keel rollers are about 7 3/4" overall, with about 6" clear in the center. The outside edges are raised up to keep the boat centered.

The dolly tongue beam measures 8" wide from just forward of the bunk/axle to the aft end which allows the roller brackets to be mounted to the beam sides, with clearance for the rollers in between. I'll mount the rollers as low as I can get them and still clear the beam. I tapered the tongue from the 8" width at the bunk, to 3" at the handle and winch. There is a framed up solid wood core at the handle end, with an internal diagonal brace to address the load from winching the boat. I cut a tapered, bird's mouth relief into the core to relieve the stress riser created from the blunt ends of the core. The picture should make that detail clear.

I did not do this on Cricket's dolly and sure enough, the tongue end snapped right there. I had to add on external braces across the joint, which solved the problem, but I wanted to avoid the issue on this one. I have seen a similar treatment of core plugs inside hollow masts, which is where I got the idea (Ross Lillistone's blog).

The top and bottom skins (flanges) go in between the sides (shear webs), and rest on ply ledgers glued inside, which also serve to bridge the butt joints in the outer skins. These ledgers were glued on first, along with the winch end blocking, then the sides were set up, upside down, and the bottom web was glued and clamped on. 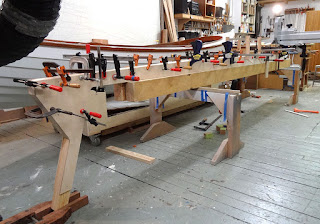 We fit the top web dry, and clamped it all up. When that cured, we flipped it back right side up, and removed the dry fitted top web so that we could organize and fit the rest of the little bulkheads and blocking. 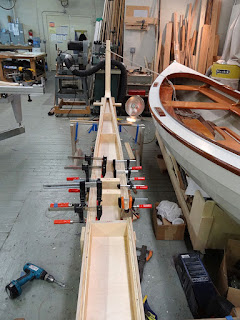 With that done, we glued on the top flange.

The structure kind of looks like a DN iceboat hull, and is built similarly. Some catamaran cross beams are built this way, too. In fact, my single outrigger akas were built just like this, except the top and bottom flanges were laminated into a curve before assembling the beams. The beauty of this closed type of beam, over an open "I" beam, is the much increased torsional resistance they exhibit. Probably overkill for this use, but I do enjoy building engineered structures.

I notched the beam to fit over the axle structure, which will also be notched, creating a half lap joint. I won't finish the axle/bunk until I mount the keel rollers. I need this done to figure the correct height for the bunk. That process will be covered next time.
Posted by Jimbo at Wednesday, November 14, 2012 1 comment: