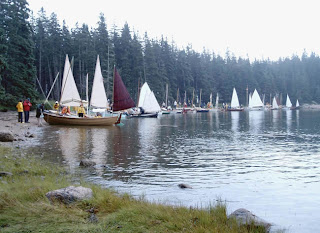 This photo of Hog Island courtesy of Douglas Oeller.

Sponsored by Wooden Boat Magazine, and organized by senior editor Tom Jackson, the third annual Small Reach (as it is affectionately known) was a huge success! Not really a regatta at all, but closer in spirit to the European raids, this year's event attracted over fifty traditionally inspired and mostly hand-built small craft. Attendance is by application only, and we (myself, my crab skiff Cricket, and crew Holly) were happy to have been included. 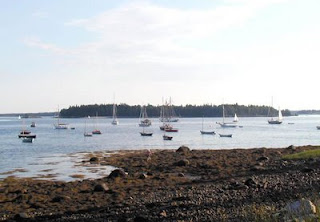 Situated on a beautiful old former dairy farm in Maine, Wooden Boat's spectacular property includes a floating dock and several hundred feet of waterfront, plus a large mooring field on Eggemoggin Reach, approximately east of Deer Isle, and southwest of Mt. Desert Island. Camping was generously provided free of charge in the old pasture and apple orchard overlooking the reach. 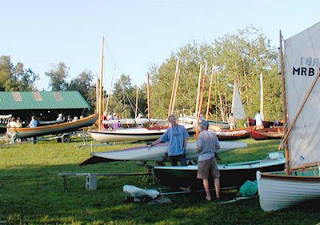 Most of the sailors arrived on Thursday afternoon, parking their trailers on the grassy lot adjacent to the launching ramp. Geoff Kerr of Two Daughters Boatworks served as launch coordinator and did a spectacular job organizing all the boats, trucks, and trailers. That evening we enjoyed a downeast chowder dinner in the pole barn next to the ramp, the first of three dinners provided by Wooden Boat's caterers for a very reasonable price. 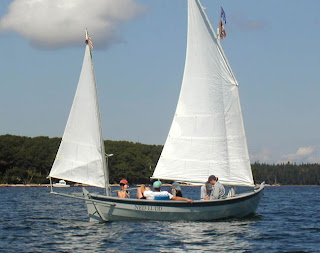 Geoff Kerr's own Caledonia Yawl, Ned Ludd. Geoff is a well known builder of this Iain Oughtred design, and several of the CY's in attendance were built by him. 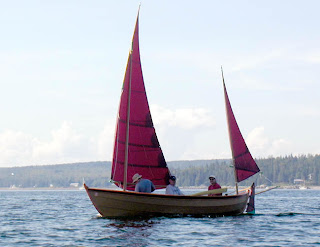 Another CY. This one built by owner, Chris Drouin.

Each morning in the pole barn, Tom Jackson would lay out the day's course and give us an idea of what sort of conditions we might expect. It is up to each skipper to familiarize him or herself with the course, and the prudent mariner will plot a few quick compass bearings and make a note of distances to be covered. Navigation is all line of sight... until the fog rolls in! It is amazing how quickly that can happen in Maine, and how short the field of view can become. 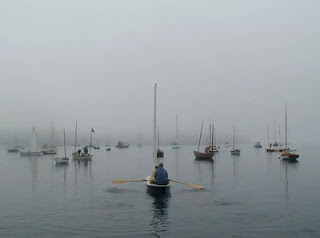 All boats were required to have a vhf radio, the appropriate charts, a compass, and a fog horn. We on Cricket were happy that we complied.

A typical course might take us around several islands, landing on one for a rendezvous and lunch (photo op), then to another location before turning home. 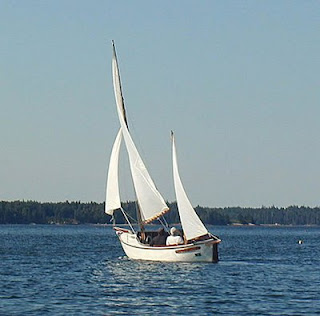 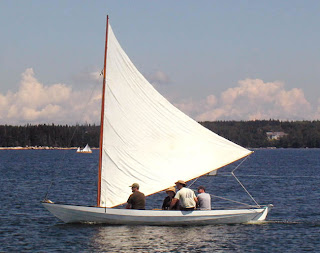 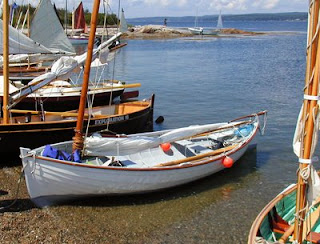 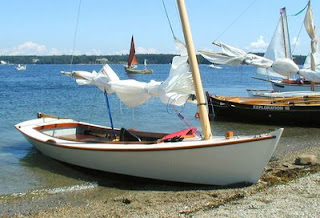 Cricket on the beach. 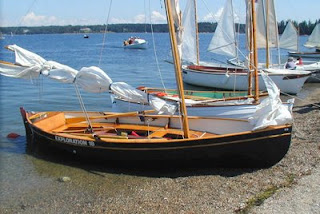 An Exploration 18, one of the two or three non-wood vessels in attendance. Jack Rabbit II came all the way from Ontario to sail.

There were several outboard powered escort vessels in constant radio contact with the fleet, ready to lend a hand if the need should arise. In the evening, most of us chose to anchor our boats out in the mooring field to avoid having to haul and re-launch from the steep ramp. I learned several things about Cricket over the weekend. For one thing, she rows beautifully. I was afraid that all of those double-ended beachboats and peapods would leave us behind if we were forced to row, but not so! We rowed several miles all told, maintaining a very easy 2 mph speed, and stayed in position with the fleet. 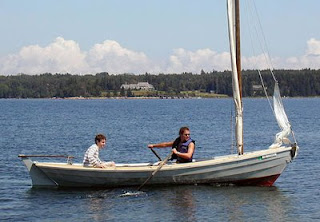 This Dory is a great sail and oar boat.

Also, Cricket rode to her anchor quite well. She has been known to sail around it, but with plenty of scope, she sat happy as a duck. Some folks made fun of my extra heavy anchor and chain, but I slept well at night. Launch service was provided by the saltiest outboard semi-dory I've ever seen, complete with bow pudding and yard dog. John, the operator of Fetch, was an amazing boat handler, and atypically, not grumpy or taciturn at all (and neither was the dog)! 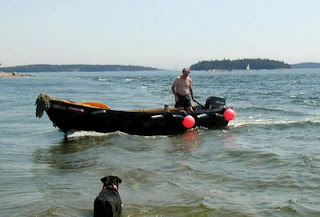 John, with Fetch and Yard Dog

On Friday afternoon, the fog rolled in along with some good wind, so the reach down into the moorings was very interesting, indeed. That night at dinner, Tom Jackson showed slides of his just completed voyage aboard the 98 foot viking ship Sea Stallion from Glendalough. His presentation of that extremely rigorous and daunting voyage in the North Sea made us all feel a little sheepish in our Helly Hansens and wellies.

By Saturday morning, the fog had thickened to the proverbial pea soup. I wondered if we would actually set out into the murk, but we did, hoisting sail and rowing with the rest of the fleet. 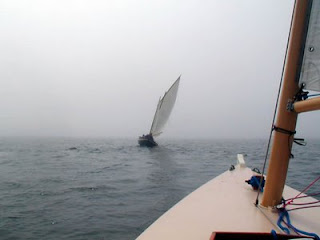 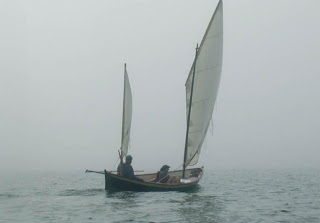 Only a very few decided to stay ashore. The going was pretty slow, and we on Cricket thought we might cut the course short, eliminating one island rounding to land at the lunch spot. By that time though, the breeze had filled in, and we were reluctant to sail away from the small mini-group that we could still see close by. One boat seemed to be heading off determinedly in the direction of the original island rounding, so we thought we might change our plans. Then, the boat we were following capsized, and immediately turtled! We now had a very serious situation on our hands. I immediately radioed the committee to advise them of the situation, and one of the other boats, a Norseboat picked up the very cold crew. Our last known position was a nun buoy, which we could no longer see. I have to admit to being a little disoriented after circling around in the near zero visibility, but tried to give John on Fetch an accurate fix. John quickly told me over the radio to forget the lat/long, and blow my foghorn when I heard his engine. I had given him the recent buoy sight, and soon heard him to the east of our position. He then quickly found us and got the crew on board. John was able to get a grappling hook on the turtled boat's shroud, and pulled her up, putting a mooring float on her masthead. By this time, we had worked out a bearing to the rendezvous point, and sailed on in. Hog Island emerged out of the fog only about a quarter mile away! It all ended well, but to think of the consequences, had no one been there to assist, was very sobering. Everyone involved learned quite a bit from the experience, a cheap lesson as they say. We on Cricket resolved to trust our boat, and our navigation, and to sail our own course. I think that in the end, our instincts had been pretty good. 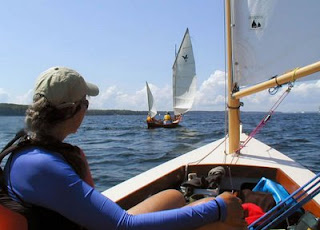 Harrier off the port bow.

At lunch, the afternoon sun broke through the murk, and we had a lovely warm sail back to the moorings. We found ourselves trading tacks with Tony Dias aboard Harrier. Tony and I have done a bit of sailing together over the years, and he invited me to jump in Harrier, putting his crew, Keith, in Cricket with Holly. 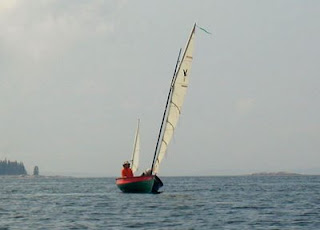 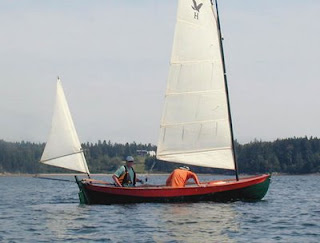 Harrier, designed by Tony Dias, and built by the Rockport Apprenticeshop for Owner Ben Fuller. Harrier is a very fast and able beach boat.

This was great as I had really wanted an opportunity to sail Harrier, and as a bonus I would be able to photograph Cricket under sail. 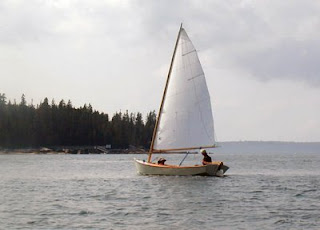 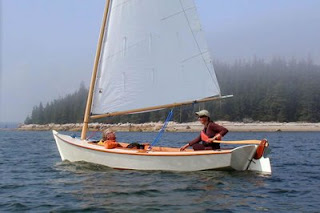 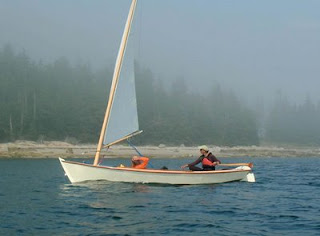 Cricket, off Babson Island, with Holly at the helm.

Dinner that evening in the pole barn was a classic downeast lobster feast, with corn, salad, and grilled sausage. The night sky cleared completely, and we were treated to a nearly full moon, rising huge and orange over the festivities.

Sunday was to be the last day of sailing, and Tom set a shorter course so that we could all get our boats hauled in the afternoon. 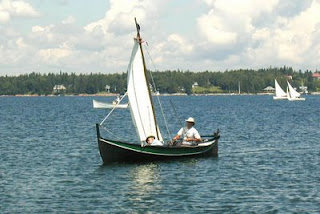 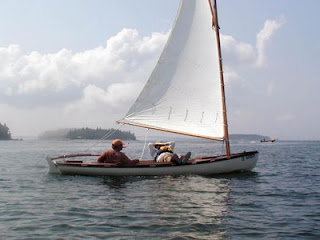 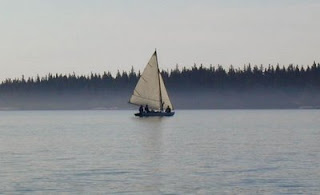 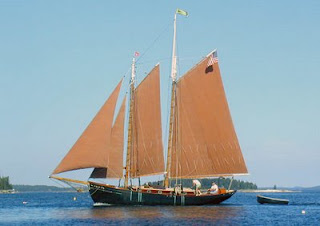 With everyone lending a hand, all fifty boats were pulled and packed up, ending what was a very memorable event. I would like to express my sincere thanks to all of those that organized and helped run this truly splendid event! Thanks for sticking it out to the end of this post. To reward those who did, here is a link to Tom Hill's video.
Posted by Jimbo at Saturday, August 30, 2008 No comments: