I've been making steady progress on Mouse over the last few weeks. I'm actually almost done painting the outside, after flipping the boat over, but that bit will have to wait until I catch the blog up to the present. Here's a little sneak preview.

But backtracking a little, one thing that needed doing was the drain plug. I bought a nifty "T" handle plug from Hamilton, but I didn't like the hull fitting it came with. I substituted a common 1/2" plumbing nipple, cutting it in half and bedding it in epoxy, in an oversized hole.

I actually had to drill 3 holes to set this up. The first 1-1/4" hole was bored just deep enough from inside the bottom to bring the nipple flush with the inside.

Before installing it, I bored a second 3/4" hole all the way through the hull, and filled that hole up with thickened epoxy. I then taped off the underside of the nipple (to keep epoxy out of the threaded inside) and set it in thickened epoxy. When cured, I drilled a 5/8" hole back through the epoxy bushing that I had earlier cast. The drain goes through the boat, but all of the wood is completely sealed with epoxy.

I had previously finished the decking, and trimmed it off flush with the hull, so it was then time to install the rub-rails. I had a nice piece of 4/4 sapele to use, and this I ripped up and scarfed together to make a pair of rails. The wood was so stable, it didn't move a millimeter after ripping.

I used my old (20 years at least) scarfing jig to plane the tapers, and glued up both pieces on a flat table.


Before fitting the rub-rails though, I went ahead and trimmed the stem-heads to final shape. I made patterns of the stems in thin ply, and transferred the layout to the boat, in ink so I could see it. I cut the shapes out as close as I could with a hand saw, chisels, and gouges (for the hollow bits), finishing up with a rasp and sandpaper. As a sidebar, I recently bought one of the newer hand-cut rasps from Gramercy Tools, and I love it. These are more affordable than the Ariou rasps, and are beautifully sharp and well balanced. I'll have the set eventually!


The rub-rails are a little tricky to fit, in that the ends have a compound bevel and have to be the exact right length. I often do this with patterns, but I was in a hurry, so I went for it, cutting the ends right on the boat without unclamping them completely. I measured the angles with two bevels, marked them out and made the cuts. They came out reasonably accurate, and I saved a pile of time.

After fitting the ends, I tapered the pieces in both thickness (siding) and in width (molding). They look much better tapered than straight, and anyway would have projected beyond the stem cutwaters, making it mandatory. I spaced out fasteners for the rails and bored the countersinks, then radiused the edges (the radius is tapered as well). To keep the rails clean during installation, I sealed them with a coat of amber shellac. I installed the rails with stainless screws, and bunged the counter-bores with plugs made on the drill press from a tapered plug cutter (the best).

I had now gotten about as far with the interior and deck as I wanted, and decided to go ahead and flip her upside down for fairing and finish painting. I gathered some help again, and we lifted her off the cradle. I'm quite pleased with her weight so far. Two of us could pick her up easily, and set her on the floor. We did get more help for flipping, though. No need for testosterone here; too much is at stake! It was fun to get a different view of the boat though, and sitting on the floor heeled over gave me better feel for her shape. I added cross pieces to the cradle and we flipped her right over onto foam pads at the gunwales.

I've now done a lot of fairing, sanding, and painting, and I also put a layer of glass on the keel, but that report will have to wait for a bit. I won't be so long though, in getting the next post out. 'Til then...
Posted by Jimbo at Friday, April 27, 2012 1 comment: 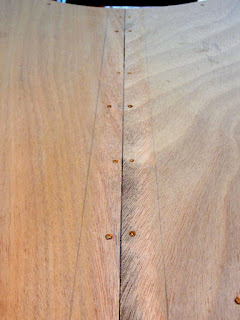 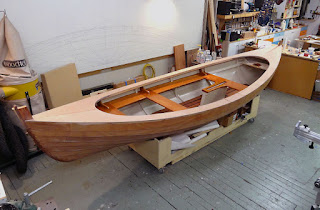 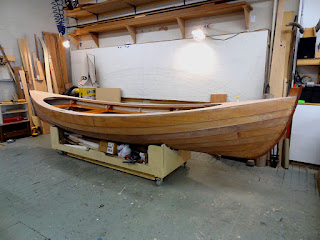 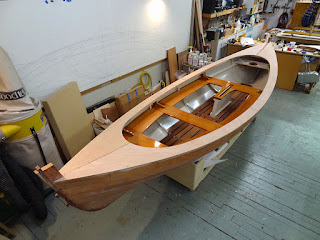 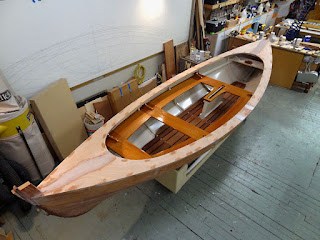 So that's where we are now. I plan to hold off on the coaming, and install the rub rails next. Then, I'll flip the boat and do my outside finish painting! Can't wait.
Posted by Jimbo at Tuesday, April 03, 2012 4 comments: