I had to order the plywood for the decking, and I wanted to bundle that order with one for a job I'm doing in the shop. Two sheets of occume doesn't hurt as bad when its buried in a $2,800 walnut lumber and plywood order, and I hated to make them come to Brooklyn with just the two sheets, so while I waited for the job to gear up, I worked out the rudder details.
I've drawn four different rudders for this boat over the time I've taken to build it, and I think the last one is a winner. Rudders can be simple, fixed blade affairs like I did on Cricket, but that one is well protected by a deep skeg. I wanted this one to kick up, and I wanted the control lines (up-haul and down-haul) led to the cockpit. I've built a few kick-ups, so I pretty much knew what I was about, but its a tricky bit of design work, none the less.
My first kick up type was swept back to mimic the rake of the dagger board. One thing to keep in mind with a raking stern post, is that the geometry of the pivoting blade swings the blade upward somewhat, as well as side to side. A swept back rudder swinging upward has to move more water in the wrong direction to do the same work as a more plumb rudder, and it could make the boat steer harder. Also, there was something I didn't like about the look of the blade hanging off the stern. I was all ready to cut this one out when I changed my mind, and completely re-designed it!
I've been looking at Iain Oughtred's double enders for years, and have always liked his rudder designs. It seemed that a similar plan form would work on the Matinicus, so I redrew mine to better fit the stern post, and to hang more nearly plumb.
I took the dimensions from the scale drawing I did in Vector Works (shown above), and lofted the rudder full size on a piece of old masonite. I then cut out the shape and hot-glued it to the boat, using small blocks to represent the gudgeon locations. I also mocked up the tiller arm and long, push-pull tiller extension, to get a feel for the steering layout.
There is a lot of rudder hardware out there, but what Walt uses on his boats, and what he recommends, is a little different than most http://duck-trap.com/rudderfittings.html. There are two sets of gudgeons, one for the stern post, and one for the rudder. The rudder pivots on a 5/16" bronze rod that slides into the holes in the four gudgeon castings. Also, a section of the stern post is dubbed off flat to hang the gudgeons on. The rudder cassette (that's what I call the top section on a kick-up type) measures about 2-1/4" thick and consists of a core 1" thick, and a pair of cheeks, each 5/8" thick. The blade is thicknessed a little less than 1" to allow it to pivot between the cheeks. Because the rudder gudgeons are only 5/8" between the straps, they have to be let in to the core, and the cheeks have to notch over them slightly as well. I temporarily screwed the rudder gudgeons to the pattern, and the stern post gudgeons to the boat, and dropped a 5/16" dowel into the setup to mimic the rod that I did not have yet. I verified that everything fit, and pivoted correctly, which is a little fussy to do. I then made a mylar tracing of all the parts from the pattern, and plotted the control lines, and blade pivot.
There's a fellow out on the west coast, James McMullen, who built a nifty Oughtred double ender. He gave me the idea for using embedded sheaves and races in the core for the control lines, and I am indebted to him for making his pictures available on the WoodenBoat Forum.
The rudder cassette has to be built from the inside out. The core is made in two halves, with half the sheave mortise in each half of the core. The race for the control lines is also cut into each half. I drilled a mortise for the sheaves on the drill press, then drilled through one half for the sheave's pivot rod.
I assembled the core temporarily with screws, and mortised in the gudgeons. When all was right, I glued the two halves of the core together permanently.
Next, I got out the cheeks from a nice board of sapele I've been saving. I realized that this was the leftover from Cricket's stern seats, and it has a nice figure. I cut them out, mortised them for the gudgeons, and assembled one side temporarily with screws. I drilled out through the core for the sheave pivots, and for the pins that fasten the gudgeons. When that much was all drilled, I put on the other cheek, flipped the assembly over, and drilled through again from the other, previously drilled side. This is the only way to be sure that everything lines up as it should, but its a fussy operation, and equally fussy to try to describe!

I've now got the cheeks glued together on the core. Screws were driven temporarily, to hold everything in place until the glue cures, and the assembly was well clamped as well. These screws will come out, and I'll drive in and bung the permanent bronze screws later. I was careful to clean off all the squeeze-out, particularly inside the cheeks where the blade will pivot up and down. I haven't made the blade yet. I'll do that when I make the daggerboard, as the two are quite similar. We'll come back to the rudder later, as there is still work to do. In the meantime, my decking has arrived, and though my wallet is considerably lighter, I'm moving closer to launch time. Next, we'll talk about the decking. Stay tuned...
Posted by Jimbo at Wednesday, February 29, 2012 No comments: 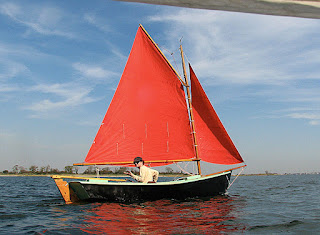 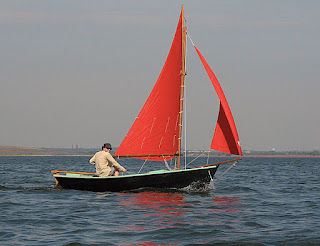 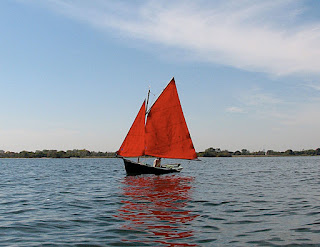 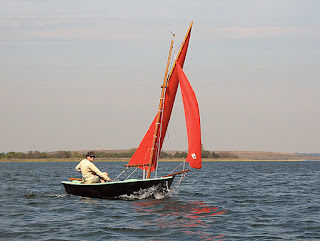 I have to get in some material to deck the boat, so in the meantime I'm working on the rudder. That's what we'll look at next time. Stay tuned...
Posted by Jimbo at Sunday, February 12, 2012 1 comment: